A hill top stirs far away from here. Mud slides are abundant as the exterior flanks give way and huge chunks of dirt roll to the valley below. The Green Man is stirring from his great year long slumber, and this year we're invited.

Yes, that's right, your friendly neighbourhood surf pop psych rock love sex vamp band are going be setting off on a dangerous and 5 hourish long drive into the deepest and most rugged wilds of Wales. Any kind of beast could run out into the road and write off our automobile. Especially at night. We'll drive in the day then.

The first wave of bands in the line-up for this majestic festival were announced on Monday and we're amongst the talent. Sharing the weekend with headliner FEIST, JONATHAN RICHMAN and a personal favourite of mine, CASS MCCOMBS with many more to be announced.

In other news we had a magnificent premiere for our wonderful new video last Friday and performed to a packed out room with support from our good friend and associate Samuel Foxton Welles. It was so awesome I forgot how good it was. You should have been there to remind me. However, if you weren't (or were, as it apparently does warrant repeated watches) you can see the video for free on the internet. For now and ever. ;) @ SFW.

Behold! The EP cover's Trilateral Quantum Dream Web! Blown up T-Shirt size and printed to be appreciated in all it's intricate glory! 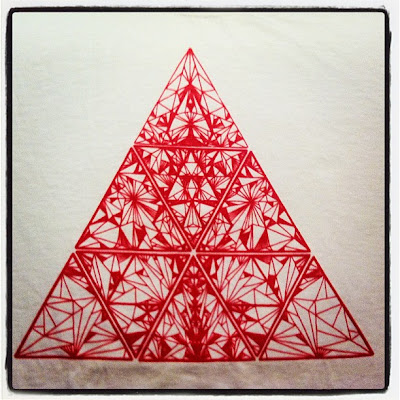 AVAILABLE TO BUY from Thursday the 1st at Paper Dress Vinage's Xmas Shindig (http://www.facebook.com/events/175180059242188/)and in ON THE WALL thereafter.

What a massive gap. Almost fell in!

In the three months it's taken me to write a new blog entry so much has happened! Really? Well kind of. YES. Ok, So ...

We are more awesome than ever before. This is TRUE. I have witnessed it my self. Only last Tuesday I was like 'Guys, we are so much better than last week'... The last time I wrote on here was 3 months ago. Imagine that! Think about it! If we're getting more and more awesome week by week, and I assure you, we are, then our trajectory is literally absolutely cosmic. We have a 50 minute set now. I was like "OMFG!" when we timed it. It was crazy. So, for the first time we are cherry picking what songs to play for gigs. This means you get a different experience first time, every time. 60% of the time you get a different experience every time. We played a show last week and didn't even play Reptile. Talk about controversial. Dave was distraught! We've got a gig in Manchester on Sunday and the set is OFF THE HOOK. I'm not even kidding.

Our EP is artworked and tangible and for sale. This is perhaps on a par with, or even better than point 1. The news is exciting because downloading mp3's and/or streaming them on the internet might appear like a worth while endeavor at first. You might think, 'This is great isn't it?' You can be checking your email and browsing information and so on whilst also streaming some hip new stuff on the internet... Wait a minute. Something's wrong.

Tell me, can you actually stream hip artwork? Perhaps you can. But can you FEEL it? I mean literally FEEL the way the wood has been pulped down and the fibers have been knitted together again in a smooth and sensual matt finish? Can you then FEEL the way the ink is eternally bound in a loving coital relationship to this wood-pulp using a space-age technique called 'screen printing'? Can you actually visually see the majestic artwork by Simon Walker with your very own eyes, (and I do mean THE Simon Walker) and not second hand, through a computer's monitor? (Now guys, computers like to think they know best, but they really fucking don't). Sure, you can print off your PDF but that's not the same. It was made by a machine! The ink wasn't pulled across that lovely firm hardened wood-pulp by a steady human hand. It was raped across by some horrible little mechanoid insect with wires in it.

This little package, our debut release, was made entirely by us and the friends we have around us. We have music performed by ALASKA. Music produced by our good friend Lewis Sleeman. Art work drawn by another friend Simon Walker, who I met through other friends Jonny and Joe who run Dots Printhaus. Artwork was screenprinted by Dots Printhaus. A comic strip drawn by Jordan Ramoth of the Black Leaf Company who I was at university with and who, incidentally, quit his job recently. (right on). You see whats going on here? It's a beautiful thing. And YES you read that correctly, there is a comic strip included in the package. It is based around the song Werewolf Women In Tow. How absolutely flipping unbelievable is that shit? Very.

All this can be yours for 3 GBP.

Did I mention all the discs were spray painted by me and Jonny? So every one is individual. 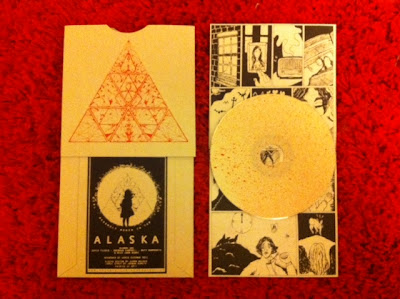 You can get your personalised ALASKA EP at any show until they run out. There are 100 in existence. Some might have been run over. Chewed up by dogs. Literally vanished into the ether. But they started out as a family of 100. And they are slowly but surely setting off on their own individual adventures.

Here is where all involved live. Apart from Si. No one knows where he lives.

We have completed a music video for our epic-yet-concise, mega-hit-in-the-making "GIRL".

Wow! Each of these points is important and awesome in it's own right! What a great 3 months ey?

The music video was directed and conceived by Stuart Ramsay, and was filmed over two days in various locations around Leeds. It will be shown in public for the first time at the end of January at an amazing "GIRL" premier party featuring ALASKA and some friends. More details to come on that... Ever seen a Vicar get pistol whipped in the face... With a RIFLE? 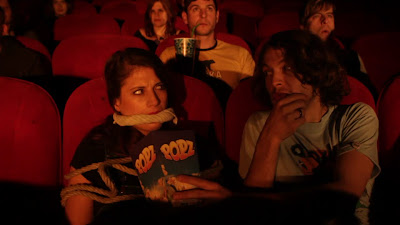 Until that rolls round you can watch this video from the 360 club, a live performance of that very same pumping-yet-tender love song "GIRL", which unfortunately is proceeded by rather a non-interview. Feel free to skip on forward! Tally HO!

-We have a Leeds Gig at the very hip Paper Dress Vintage's XMAS PARTY, which takes place on the 1st of December.

-Dots will be printing some ALASKA t-shirts to sell at this gig, and future gigs, along with the EPs and also some of those ANCIENT ALASKA screen prints we did about a year ago. Only one of those got taken and it turned out it was STOLEN by Dave-bass-player's dad. Still.

-Teaser trailer for the "GIRL" movie experience will be hitting the net at some point soon.

-The "GIRL" Premier itself projected for January. More details to follow.


AND THAT"S ALL THE WEATHER.

njh
Posted by Nick John Henry at 18:37 No comments:

Whilst various members of ALASKA have been gallivanting around different parts of this graceful spinning EARTH, I, Nicholas, have been hard at work on the forthcoming ALASKA CASSETTE. A collection of demos recorded into my laptop. There will only be 30 of these available and they arrived in the post as blank cassettes earlier this summer (PAH SUMMER). You can find a picture of them in the last post. The idea is that these songs may come to be a part of our bands roster or they may not. They will, however, never be released on another format in their current form. APART FROM THIS ONE!

New In Town (Demo) by ALASKASOUNDS

Posted by Nick John Henry at 15:39 No comments:

Here we have a bit of footage from our recent foray back into the world of the 360 club. Its a partial film of 'Ghost In Your Mind' which was filmed from the crowd. I think the quality is clear enough to warrant a post, but the good news is we are expecting a multi-shot video of two of our songs as the performance was filmed by the 360 club, which is expected to surface soon. In the mean time, have a look/listen.

ALSO a reminder of the review of said performance, which can be found here...

Look what came in the post? I wonder what we'll do with them... 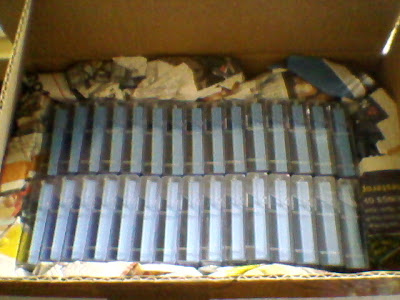 Posted by Nick John Henry at 10:46 No comments: 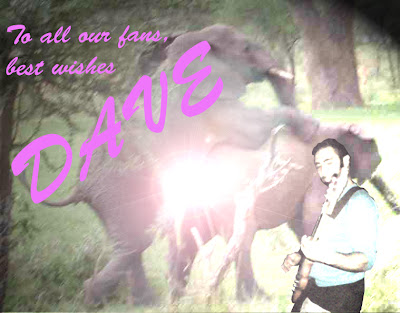 Posted by Nick John Henry at 11:39 No comments:

Here you are, you can listen to our complete EP for free here.

Werewolf Women In Tow by ALASKASOUNDS

Feel free to get up and dance around your room.

Also we have a review, which can be found over at Leeds Music Scene.

Anyone want to put us on in a grander setting!?

Ta folks, and Rebecca Atkinson for your kind words.
Posted by Nick John Henry at 07:27 No comments: